Chiropractic and Physical Therapy are separate professions. Legally, they have different licensing requirements, testing, and different oversight boards. Yet, there are many overlaps in the education of chiropractors and physical therapists. Consequently, there are overlaps in the practice of chiropractic and physical therapy. These overlaps are officially within the scope of practice of both professions.

Traditionally, physical therapy uses modalities (electrical and others), physical interventions (tissue work, massage, stretching, etc.), orthopedic appliances (braces, supports, etc.) and advice (exercise, ergonomics, etc.) to address different stages of a pathophysiological process. Chiropractors are similarly trained in the use of these modalities and approaches, and hence they are legal components of chiropractic clinical practice. However, the primary clinical emphasis of chiropractic is different than that of physical therapy. Chiropractic clinical practice emphasizes joint (primarily spinal) manipulation.

In 1969, a study was published in The Australian Journal of Physiotherapy, titled (9):

Low Back Pain and Pain Resulting From Lumbar Spine Conditions:
A Comparison of Treatment Results 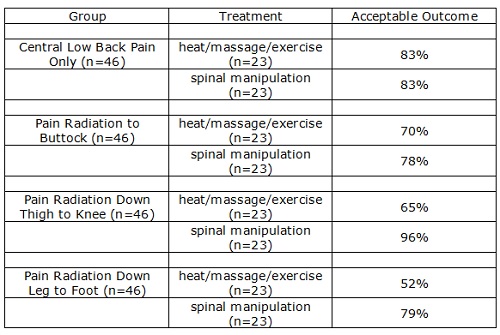 The results “indicate that treatment of low back pain and pain resulting from low back conditions by passive movement techniques of mobilization and manipulation is a more satisfactory method than by standard physiotherapy of heat, massage, and exercise, in regards to both results and number of treatments required.”

“The survey also indicated that by using techniques of mobilization good results can be obtained with patients even if neurological signs are present.”

This study by Edwards was reviewed in the 1990 reference text, White and Panjabi’s Clinical Biomechanics of the Spine. Drs. White and Panjabi make the following points pertaining to the Edwards article (10):

In the group with central low back pain only, “the results were acceptable in 83% for both treatments. However, they were achieved with spinal manipulation using about one-half the number of treatments that were needed for heat, massage, and exercise.”

In the group with pain radiating into the buttock, “the results were slightly better with manipulation, and again they were achieved with about half as many treatments.”

It is usual for pain that travels further down an extremity to be associated with greater compression, or a larger disc protrusion. In this study by Edwards, manipulation worked excellently in patients with leg pain radiation, especially when compared to heat/massage/exercise.

This study was a randomized comparison of chiropractic and hospital (physical therapy) outpatient treatment in the management of low back pain. This trial involved 741 patients. The patients were followed for a period between 1–3 years. Nearly all of the chiropractic management involved traditional joint manipulation. The authors concluded:

“Chiropractic treatment was more effective than hospital outpatient management, mainly for patients with chronic or severe back pain.”

“Chiropractic was particularly effective in those with fairly intractable pain-that is, those with a history of severe pain.”

“Patients treated by chiropractors were not only no worse off than those treated in hospital but almost certainly fared considerably better and that they maintained their improvement for at least two years.”

Important for this discussion, 84% of the hospital patients were treated with physical therapy. This observation led to an editorial follow-up in a different journal, Lancet, which stated (12):

Chiropractors and Low Back Pain

The study “showed a strong and clear advantage for patients with chiropractic.”

“This highly significant difference occurred not only at 6 weeks, but also for 1, 2, and even (in 113 patients followed so far) 3 years after treatment.”

“Surprisingly, the difference was seen most strongly in patients with chronic symptoms.”

“The trial was not simply a trial of manipulation but of management” as 84% of the hospital-managed patients had [physiotherapy] manipulations.

“Chiropractic treatment should be taken seriously by conventional medicine, which means both doctors and physiotherapists.”

“Physiotherapists need to shake off years of prejudice and take on board the skills that the chiropractors have developed so successfully.”

The authors of the Meade study note that if all back pain patients without manipulation contraindications were referred for chiropractic instead of hospital treatment, there would be significant annual treatment cost reductions, a significant reduction in sickness days, and a significant savings in social security payments.

“Spinal manipulation is a high-velocity low-amplitude thrust to a specific vertebral segment aimed at increasing the range of movement in the individual facet joint, breaking down adhesions and stimulating production of synovial fluid.”

The severity of subjects’ symptoms was assessed before and after treatment using the Gargan and Bannister (1990) classification:

The Gargan and Bannister Whiplash Classification

These patients had all become chronic, and were referred for chiropractic at an average of 15.5 months (range was 3–44 months) after their initial injury. Ninety six percent (27/28) of the study subjects were classified as category C or D symptoms at the time of initial chiropractic treatment.

“The results of this retrospective study would suggest that benefits can occur in over 90% of patients undergoing chiropractic treatment for chronic whiplash injury.”

Once again, spinal manipulation appears to result in a positive clinical outcome when compared to physical therapy in the treatment of a common musculoskeletal pain syndrome, chronic whiplash injury.

In 2002, an study was published in the Annals of Internal Medicine, and titled (14):

Manual Therapy, Physical Therapy, or Continued Care by a
General Practitioner for Patients with Neck Pain:
A Randomized Controlled Trial

The authors defined “manipulation” as:

“Orthopedic manipulative (manual) therapy is a specialization within physical therapy and provides comprehensive conservative management for pain and other symptoms of neuro-musculo-articular dysfunction in the spine and extremities.”

The authors compared the effectiveness of manual therapy, physical therapy, and care by a general practitioner physician in the treatment of neck pain, using a randomized controlled trial design. The study involved 183 patients. These authors concluded:

“Manual therapy scored consistently better than the other two interventions on most outcome measures.”

“In daily practice, manual therapy is a favorable treatment option for patients with neck pain compared with physical therapy or continued care by a general practitioner.”

“The success rates for manual therapy were statistically significantly higher than those for physical therapy.”

“The postulated objective of manual therapy, the restoration of normal joint motion, was achieved, as indicated by the relatively large increase in the range of motion of the cervical spine.”

“Manual therapy seems to be a favorable treatment option for patients with neck pain.”

In this study, the primary authors are physical therapists, and they found that manual manipulative therapy was superior to traditional physical therapy in the management of neck pain.

In 2004, a study was published in the Journal of Whiplash & Related Disorders titled (15):

The authors are trained as physical therapists. They state that the goal of joint manipulation is to restore maximal, pain-free movement of the musculoskeletal system. The aim of this clinical trial is to compare the results obtained with a manipulative protocol with the results obtained with a conventional physiotherapy treatment in patients suffering from whiplash injury. The study included 380 acute whiplash injured subjects.

“Results showed that the manipulative group had more benefits than the physiotherapy group.”

“Our clinical experience with these patients [whiplash-injured] has demonstrated that manipulative treatment gives better results than conventional physiotherapy treatment.”

“Manipulative treatment is more effective in the management of whiplash injury than conventional physiotherapy treatment.”

Once again, this study supports that joint manipulation is influencing different tissue sources of musculoskeletal pain, resulting in an improved clinical outcome.

In 2016, a study was published in the Journal of Occupational Rehabilitation titled (16):

The objective of this study was to compare the duration of financial compensation and the occurrence of a second episode of compensation for back pain among injured workers seen by three types of first healthcare providers (physicians, chiropractors, and physiotherapists). The study used a cohort of 5,511 injured workers who were followed for a period of two years. The authors found:

“Physiotherapists showed the longest duration of compensation, and chiropractors showed the shortest.”

“When compared with medical doctors, chiropractors were associated with shorter durations of compensation and physiotherapists with longer ones.”

“Physiotherapists were associated with higher odds of a second episode of financial compensation.”

“We found that the workers who sought chiropractic care experienced shorter durations of compensation.”

“The physiotherapy patients were also more likely to experience a second episode of compensation. Our results raised concerns regarding the use of physiotherapists as gatekeepers of Ontario’s worker’s compensation system.”

“These differences raise concerns regarding the use of physiotherapists as gatekeepers for the worker’s compensation system.”

This study argues that chiropractic spinal manipulation is very effective in the treatment of low back pain, especially in comparison to other treatment approaches. It would also support the argument, as a consequence of its superior treatment outcomes, that chiropractic should be the gatekeeper for the worker’s compensation system.

“We are writing to relay our consternation about the guideline article by Bier et al [17] in the March issue of Physical Therapy Journal.”

“We fully support the increasing emphasis on critical evaluation of the assessment and intervention models used in physical therapist practice.”

“The long- overdue acknowledgment of research that does not support much of what constitutes the bulk of physical therapist practice is a refreshing and honest introspection that can potentially initiate much needed change within our profession.”

“Without such change, our profession is destined to continue on our current path of practice that is increasingly shown to be yielding outcomes that are less than desirable.”

“Such exploration inevitably leaves us with gaping holes in practice that can be unsettling.”

“The natural and responsible tendency is to search for alternate measures and interventions to fill this gap.”

These comments are particularly noteworthy because of the credentials of the authors:

Jan Dommerholt is from Bethesda Physiocare LLC, Bethesda, Maryland. Dr. Dommerholt is a diplomate of the Academy of Integrative Pain Management.

The magnitude of pain in America and its clinical management is a nightmare. Approximately half of the adults in our country suffer from chronic pain (19). A shift in the thinking and approach to the management of our pain problem was published in the Journal of the American Medical Association, June 12, 2018, titled (20):

Dr. Robert Kerns, PhD, is a clinical psychologist and a professor of psychiatry, neurology, and psychology at Yale University. He has spent four decades treating and studying pain in veterans and military service members. He is at the forefront of a research initiative investigating nondrug approaches to pain management. Dr. Kerns notes that it is important to think about alternatives to drug approaches for pain control to try to “avoid some of the complications of overuse of medications.”

Dr. Kerns notes that the only approaches to be considered in the nondrug approaches to pain management would have to “have sufficient evidence to suggest their potential value.” Importantly, Dr. Kerns notes that chiropractic and spinal manipulation are such an “evidence-based approach” to pain management. Consequently, he notes that chiropractic manipulation, as the first approach, should be assessed.