On Monday, March 3, 2018, the front page of the newspaper USA Today printed a “snapshot” noting that “US consumers spend an average of 7.8 hours each day engaging with digital content.”

Leaning Forward During Phone Use May Cause ‘Text Neck’

In this article, Ms. Crist makes the following points:

This week (March 5, 2018), reporter Kirsten Fleming wrote an article that was published in The New York Post, titled (2):

Tech is Turning Millennials Into a Generation of Hunchbacks

In this article, Ms. Fleming profiles the situation of a young man, CY, who began suffering from upper-back pain and neck soreness while in his late teens, subsequent to a habit of hunching over his cellular phone. As his symptoms progressed he developed constant pain, he hunched his shoulders, and the pain caused him to wake up numerous times throughout every night, causing constant fatigue. His upper back and neck would become incredibly tight; his neck was always bent forward.

After a decade of suffering, CY’s chiropractor diagnosed him with “tech neck,” explaining that the cause was the forward/bent neck posture he assumed while using his laptop and iPhone. “Tech neck” is a painful forward head syndrome. It is an increasingly common condition caused by slumping over devices for hours a day, leading to a reversal of the natural neck spinal curve and triggering a physiological imbalance in the upper body.

“Previously seen in middle-age or older desk jockeys and dentists who hunch over patients, it’s now materializing in younger generations who grew up with smartphones, tablets and other personal devices.” Not only does the syndrome cause structural problems in the neck and back, it can also spark breathing and panic issues.

The loss or reversal of the normal cervical curve is easily diagnosed with postural x-rays.

“As posture worsens, the upper back muscles stretch out, while the muscles in the front of the body become weaker and the neck creeps forward.” Young women are particularly susceptible to the condition because they have lower muscle density in their upper body.

“iPhone-obsessed millennials poring over Instagram and Snapchat all day don’t want to admit that their precious electronic lifelines might be detrimental to their health.”

“Undoing the damage is a process that includes breaking bad habits, taking standing breaks and doing exercises such as yoga, foam rolling and stretches that promote good carriage and strengthen core and upper body muscles. Experts also advise patients to hold mobile devices with their elbows at 180 degrees so the screen is in front of their faces.”

Consulting chiropractors made the following comments pertaining to tech neck: 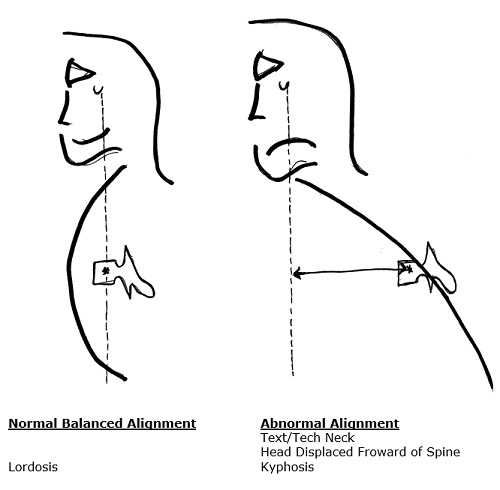 Understanding the Biomechanics of Text/Tech Neck

The effective load on the fulcrum is greater than the sum of the weight of the load plus the counterbalancing effort because the distance they are from the fulcrum is mechanically multiplied: 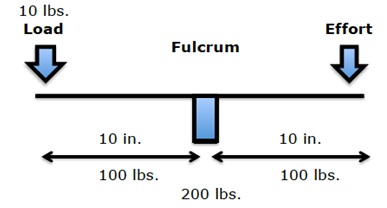 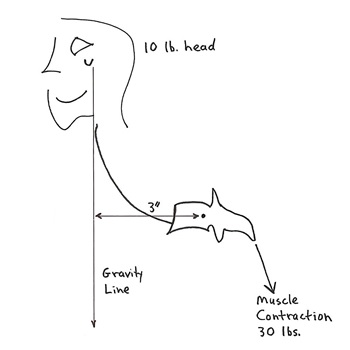 If the weight of the head is 10 pounds and the head is displaced forward by 3 inches, the load on the spinal fulcrum (the vertebrae) is 30 pounds (10 pounds X 3 inches). The required counter balancing muscle contraction on the opposite side of the fulcrum (the vertebrae) would also be 30 pounds. The net total increased fulcrum (spinal vertebral) load is 60 pounds. This exposes the spinal column (vertebrae) to chronic wear and tear damage. The common lexicon for this wear and tear damage is degenerative joint disease, or more simply, spinal arthritis.

When the head is chronically bent forward, the muscles (the effort) on the opposite side of the spinal column must chronically contract to prevent the person from falling forward and to maintain balance (3).

The chronic counterbalancing muscle contraction results in chronic inflammation, pain, muscle tissue fibrosis, and functional disability (3). The syndrome associated with this sequence of events has been termed myofascial pain syndrome (4, 5, 6).

Chronic forward bending of the head/neck causes a number of clinical problems, including:

The explosion of text/tech neck health problems has not gone unnoticed in the scientific/medical literature:

In this article, Dr. Hansraj notes that billions of people are using cell phone devices on the planet, essentially in poor posture. Consequently, the purpose of this study was to assess the forces incrementally seen by the neck (cervical spine) as the head is tilted forward, into worsening forward head posture. Dr. Hansraj notes that this data is necessary for cervical spine surgeons to understand in the reconstruction of the neck.

Dr. Hansraj indicates that an average person spends 2-4 hours a day with their heads tilted forward reading and texting on their smart phones / devices, amassing 700-1400 hours of excess, abnormal cervical spine stress per year. A high school student may spend an extra 5,000 hours in poor posture per year.

Dr. Hansraj created a cervical spine model to calculate the forces experienced by the cervical spine when in incremental flexion (forward head position). His mathematical analysis used a head weight of 13.2 pounds. He claims that there are no other prior studies assessing the stresses about the neck when incrementally moving the head forward. His calculations are as follows:

Dr. Hansraj makes the following key points in his study:

“Poor posture invariably occurs with the head in a tilted forward position and the shoulders drooping forward in a rounded position.”

“The weight seen by the spine dramatically increases when flexing the head forward at varying degrees.”

In January of 2017, researchers from the Department of Occupational and Environmental Medicine, University of Gothenburg, Sweden, published a study in the journal Applied Ergonomics, titled (18):

The aim of this study was to examine whether texting on a mobile phone is a risk factor for musculoskeletal disorders in the neck and upper extremities in a population of young adults, aged 20-24 years. The study duration was 5 years.

The authors indicate that young adults today have grown up with mobile phones as an evident part of their lives. Access to mobile phones was 99% in the group of young adults they studied. In the United States, text messaging is the most frequently used type of communicative medium.

The authors note that text messaging places a repetitive physical exposure on the neck, shoulders, arms and thumbs. Studies have identified musculoskeletal disorders in the forearm and thumb, tendonitis, tenosynovitis, and first carpometacarpal (CMC) arthritis, in relation to excessive texting on a mobile phone. “Texting can be associated with musculoskeletal disorders of the neck and upper extremity.”

In the subjects with symptoms, almost all individuals had the neck flexed forward and did not support their arms. “This causes static muscular load in the neck and shoulders. Furthermore, they held the phone with one hand and used only one thumb, implying increased repetitive movements in hand and fingers. This distinguished them from the group without symptoms, in which it was more common to sit with a straight neck, to support the forearm, to hold the phone with two hands and to use both thumbs.” The authors concluded:

“Sitting with the head bent forward while texting was more common among those with musculoskeletal symptoms.”

“Associations were found between text messaging and reported pain in the neck/upper back, shoulder/upper extremities, and numbness/tingling in the hand/fingers for both men and women.”

“There were clear associations between the highest category of text messaging and pain in the neck/upper back.”

“Sustained neck flexion may be a risk factor for developing pain in the neck, shoulder, and upper extremities.”

“Sitting with the head bent forward without supporting the arms causes a static load in the neck and shoulder muscles, which could explain the reported pain from neck/upper back.”

“Sustained muscle load and posture are considered to be risk factors for developing musculoskeletal disorders.”

“Associations with neck and upper extremity pain were found at levels of text messaging as low as 6 texts/day.”

“The strongest associations with neck/upper back and shoulder pain concerned the highest exposure category (>20 texts/day) in both men and women.”

“A prospective study with a working population showed that flexing the neck  >20° for more than 40% of the working day was a risk factor for sick leave due to neck pain.”

These authors believe that the associations between cell phone use and health symptoms are underestimated because they did not include data on how much the participants use their mobile phones for other activities, e.g. gaming.

In June 2017, physicians from the Departments of Orthopaedic Surgery and Neurosurgery, Cedars-Sinai Medical Center, Los Angeles, CA, USA, published a study in The Spine Journal, titled (19):

“Text Neck”
An Epidemic of the Modern Era of Cell Phones?

The authors note that cellular/smart phones are everywhere. They are being extensively used by people of all ages. A concern to the modern era physician is the potential musculoskeletal consequence of this extensive cell phone usage, especially texting.

Extensive cell phone use and postures cause spondylotic changes consistent with an aged spine, but they are now being found in younger and younger age groups, including:

As spine surgeons, the authors have been noticing a rise in the number of patients complaining of neck and upper back pain. It is plausible that these increased stresses upon the cervical spine result in accelerated cervico-thoracic disc degeneration. These authors propose that there are significant increases in intradiscal pressure during flexion, and that “chronic increased intradiscal pressure likely contributes to disk degeneration [cervical spondylosis] and herniation.”

These authors cite a finite element analysis that measured the increased loads imparted onto the cervical spine at progressively flexed postures. The findings included:

These authors also cite a study of over 7,000 young adult subjects (age 20–24) over a 5-year period that showed “persistent neck pain and upper back pain is associated with time spent text messaging.” This same study also showed increased “shoulder pain, numbness, and tingling in the hand or fingers in those subjects who spent the most time texting.”

“It now seems rather clear that repetitive texting, or similar activity while using a forward flexed neck position, may lead to neck pain or ‘text neck’.”

These authors have great concern for the consequences of prolonged cervical spine flexion while texting on the developing (growing) spine. They note that persistent, prolonged forward flexed neck position may lead to anterior ligamentous contractures, accelerating cervical disk degeneration and cervical kyphosis.

These authors make these recommendations to avoid and/or treat text/tech neck:

Chiropractors are expertly trained in the ergonomic avoidance of the postures that lead to text/tech neck, advising and coaching thousands of patients on these issues daily. Chiropractic clinical practice offers a variety of treatment approaches that are very effective in the management of the text/tech neck syndrome (20, 21, 22, 23, 24, 25, 26, 27, 28). 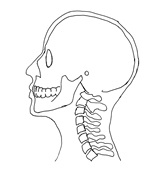