The Neck Curve
The Importance of Cervical Lordosis

When viewing the human spinal column from directly in front or directly behind, it should be straight and without lateral (sideways) deviation. The health and function of the human spinal column is optimum when there is no lateral (sideways) deviation into the coronal plane. This concept is well-noted by Joel Goldthwait, MD, and well-reviewed by James Oschman, PhD (1):

Gravity is the most potent physical influence in any human life.

“Gravity pervades our bodies and our environment and affects our every activity. All of the structures around us - our homes, furniture, buildings, machinery, plant, and animal, - and our own bodies, are designed to function in a world dominated by gravity.”

“To introduce the therapeutic significance of gravity, we summarize the work of Joel E. Goldthwait and his colleagues at Harvard Medical School.” “A surgeon in Boston and founder of the orthopaedic clinic at the General Hospital, Goldthwait developed a successful therapeutic approach to chronic disorders. The aim of his therapies was to get his patients to sit, stand, and move with their bodies in a more appropriate relationship with the vertical. After years of treating patients with chronic problems, he concluded that many of these problems arise because parts of the body become misaligned with respect to the vertical, and organ functions therefore become compromised.”

“Goldthwait’s therapeutic approach was based in part on observations made while performing surgery on such patients. He noticed that abdominal nerves and blood vessels are under tension in individuals whose bodies are out of alignment. He also reported ‘stretching and kinking’ of the cerebral arteries and veins in those whose necks were bent. Various cardiac problems were correlated with ‘faulty body mechanics’ that distorted the chest cavity in a way that impaired circulatory efficiency. Goldthwait also documented with X-rays a build-up of calcium deposits around the vertebrae of individuals with chronic arthritis, and observed that these deposits can diminish when the individual acquires a more vertical stance. His therapeutic approach corrected many difficult problems without the use of drugs. He viewed the human body from a mechanical engineering perspective, in which alignment of parts is essential to reduce wear and stress. He pleaded with physicians to recognize and correct misalignments to prevent long-term harmful effects.”

“Likewise, there is only one stable, strain-free arrangement of the parts of the human body. Any variation from this orientation will require corresponding compensations in other parts of the support system.”

“Misalignment of any part will affect the whole system, and that restoration of verticality is a way to address a wide variety of clinical problems.”

Dr. Goldthwait pleaded for everyone to pay more attention to the ways they hold and move their bodies in relation to the gravity field, particularly in the coronal plane. However, medicine was being swept away in the tide of drug-based medicine that continues today, and healthcare has largely forgotten his advice. Today, the chiropractic profession champions Goldthwait’s postural advice.

In contrast to the straight-on front and back views of the spinal column, when the spine is viewed from the side, optimum health and function requires four distinct spinal curves (2): 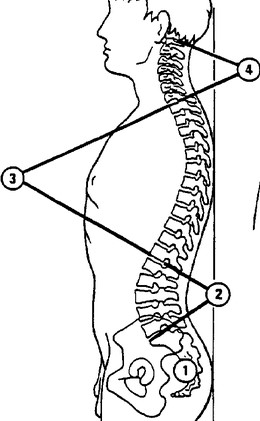 This paper reviews the clinical importance of cervical lordosis. 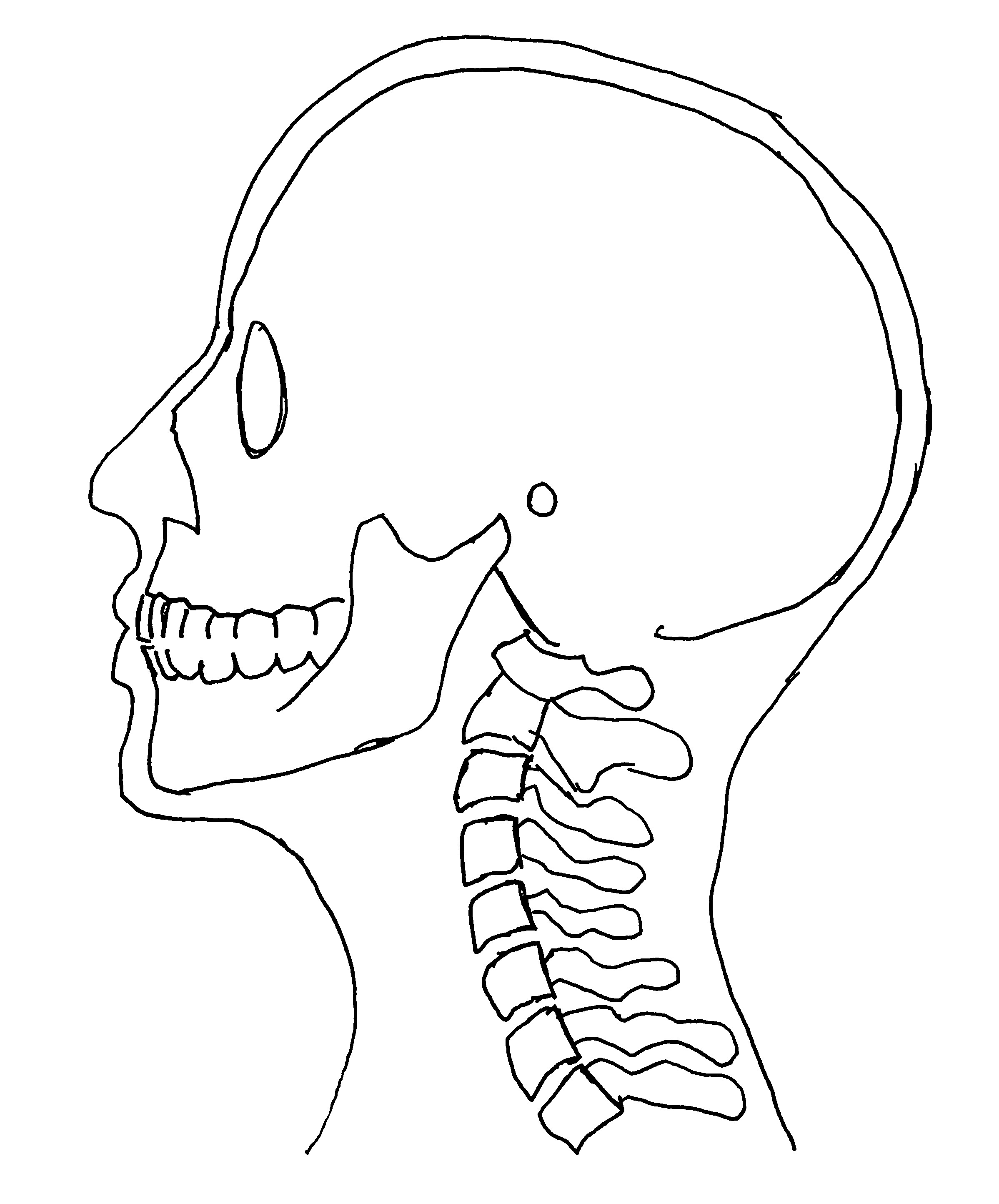 Loss of cervical lordosis is categorized into three groups: 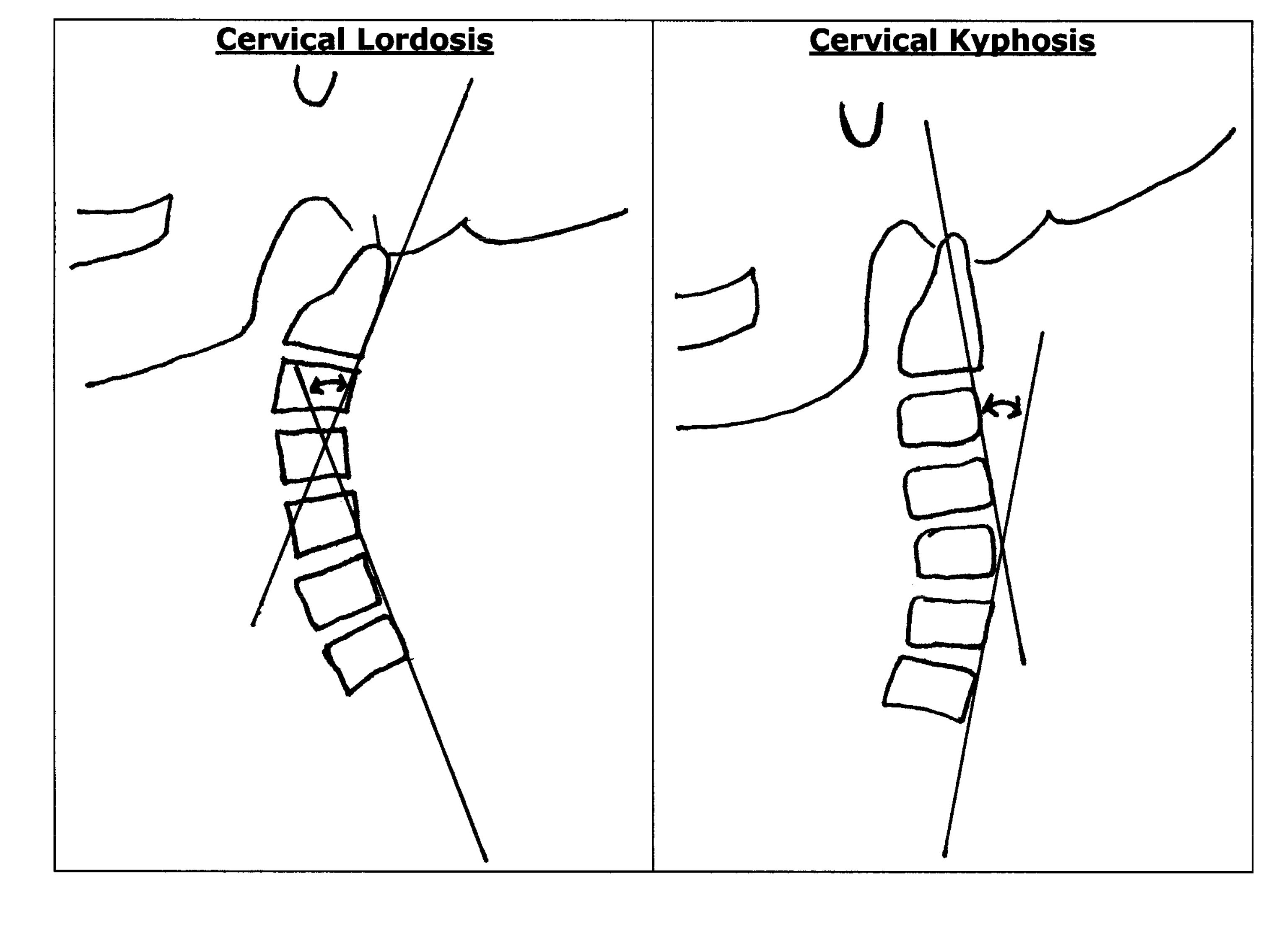 Loss of the normal cervical spine lordosis is associated with a number of neuromusculoskeletal problems. The primary problems fall into five categories:

With loss of cervical lordosis, the head and its weight are displaced forward of the spinal column. To prevent such a person from falling onto their face, the muscles in the back of the spinal column will contract to maintain balance (3). The chronic counterbalancing muscle contraction results in chronic inflammation, pain, muscle tissue fibrosis, and functional disability (3). The syndrome associated with this sequence of events has been termed myofascial pain syndrome (4, 5, 6).

If the weight of the head is 10 lbs. and the loss of lordosis displaces the head’s center of gravity forward by 3 inches, the required counter balancing muscle contraction on the opposite side of the fulcrum (the vertebrae) would be 30 lbs. (10 lbs. X 3 inches): 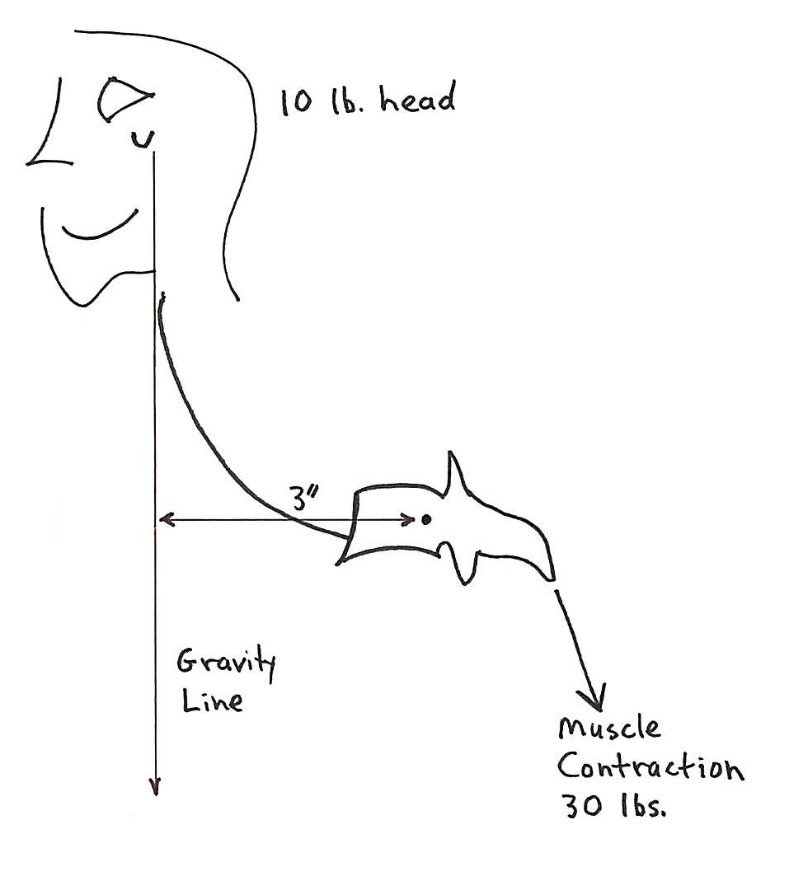 In such cases, muscle therapy (massage and various forms of interventional modalities) is helpful, but not a long-term solution. The best solution is improvement of cervical lordosis, reducing lever-arm stress, allowing the counterbalancing muscles to relax.

Loss of cervical lordosis not only displaces the head forward resulting in counterbalancing muscle contraction, it also significantly increases the load on the fulcrum (the intervertebral disc and facet joints) (7, 8). This causes and accelerates degenerative disc and joint disease in the cervical spine (9, 10).

The acceleration of degenerative disc and joint disease is most pronounced when there is a reversal of the cervical lordosis (kyphosis) (11, 12).

An important experimental study was published in the journal Spine in 2005 pertaining to cervical spine kyphosis and demyelination of the spinal cord (15). The article was titled:

This study showed that cervical spine kyphosis resulted in compression of the anterior vascular supplies to the spinal cord, eventually resulting in spinal cord demyelination. The demyelination was greatest at the apex of the kyphotic deformity. Angiography showed a reduction in the density of capillary networks and interruption of capillaries at the compressed spinal cord from kyphosis. The authors state:

“The anterior funiculus in the [kyphotic] group, was the most extensively compressed, showed most marked histologic changes such as demyelination and irregularity of the spared myelin sheath.”

“As the kyphotic angle increased, these changes became more marked, especially in the ventral side of the spinal cord that was directly exposed to mechanical compression.”

“As kyphosis progressed further, the demyelination of the axon spread to the lateral funiculus and then to the posterior funiculus. Marked histologic changes were seen on the ventral side of the spinal cord, probably because of continuous mechanical stress caused by the kyphotic deformity.”

“Demyelination of the axons progressed in the order of the anterior, lateral, and then posterior funiculus.” 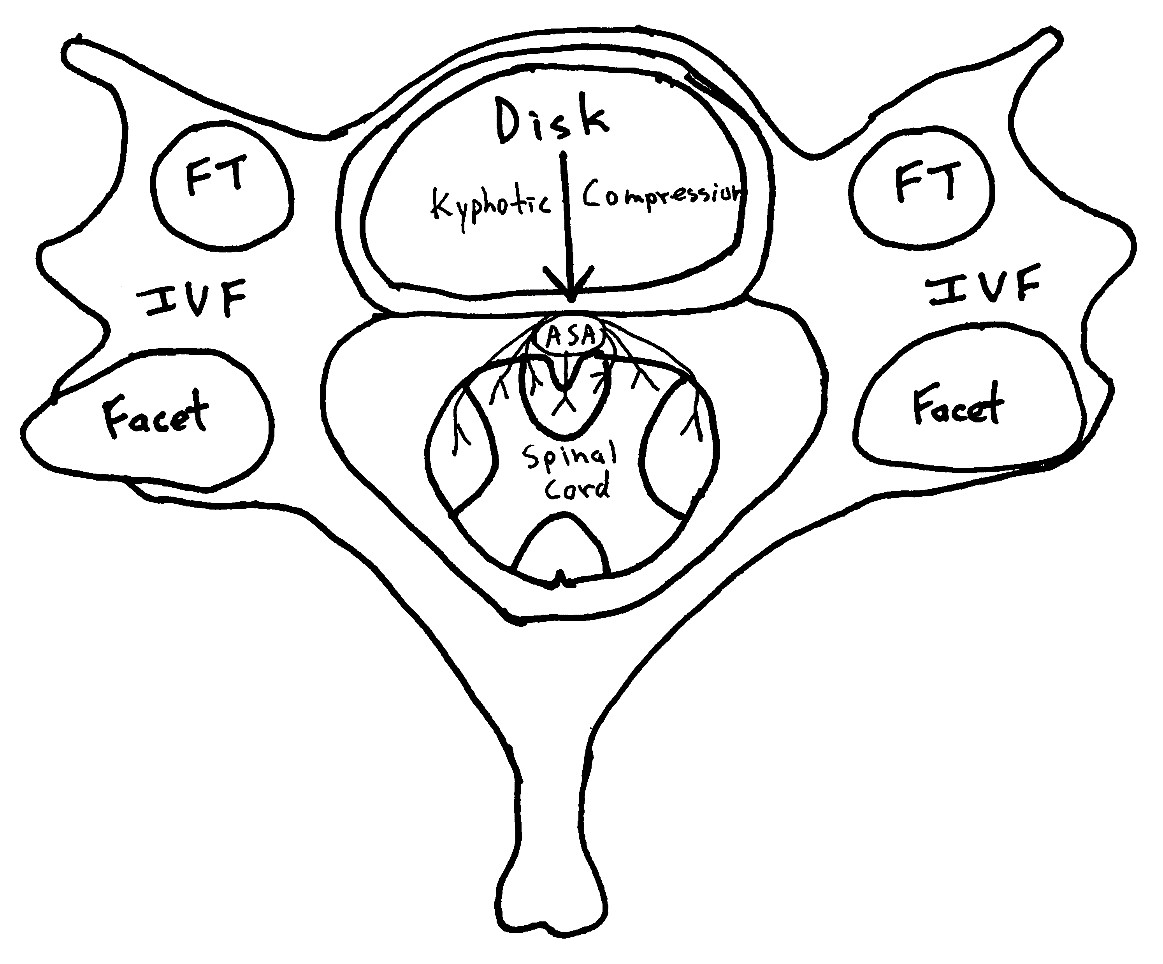 The Anterior Spinal Artery (ASA) is the primary blood supply to the neurons of the anterior and lateral spinal cord.

An important article on this topic was published in the journal Medical Science Monitor in 2016, and titled (16):

Thirty patients with loss of cervical lordosis and 30 carefully matched controls were assessed bilaterally (60 arteries each group) with Doppler ultrasonography. Vertebral artery hemodynamics, including lumen diameter, flow volume, peak systolic velocity was measured, and values were statistically compared between the patient and the control groups. The cervical lordosis was assessed on lateral cervical radiographs using the posterior tangent method; the lordosis was defined as the angle between the posterior margins of the vertebral bodies C2 and C7. These authors make these points:

“This natural lordotic curvature of the cervical spine is considered to be an ideal posture in terms of biomechanical principles.”

“The normal cervical spine has a lordotic curve. Abnormalities of this natural curvature, such as loss of cervical lordosis or cervical kyphosis, are associated with pain, disability, and poor health-related quality of life.”

When the cervical curve flattens, the vertebral arteries “are also in danger of being stretched or compressed.”

“The results of this study indicate that loss of cervical lordosis is associated with decreased vertebral artery values in lumen diameter, flow volume, and peak systolic velocity.”

Chiropractic clinical practice includes the assessment and treatment of both alignment and the normal lateral spinal curves, including cervical lordosis. The most accurate assessment of spinal curves is with x-rays.

Chiropractors use a number of techniques to improve and/or restore the cervical spine lordosis. There are several studies in the PubMed Database indicating that chiropractic can improve and even reverse cervical kyphosis. The procedures usually involve combinations of certain adjustments and extension traction (17, 18, 19, 20, 21, 22, 23, 24, 25).