After undergraduate college, chiropractic college/university is an additional 4-5 year program. After completing the program and having passed all national and state board examinations, the graduate is awarded the degree of DC, which stands for Doctor of Chiropractic. Yet, while being educated, instructors often note that the DC degree actually stands for “Doctor of Chronic.” This is because chiropractors thrive on chronic pain patients, especially chronic spinal pain patients.

There is no doubt that chiropractic and spinal manipulation works well in the treating of chronic spinal pain problems, including in patients who have failed to achieve an acceptable clinical response to other more traditional approaches to their problems (1, 2, 3, 4, 5, 6, 7, 8, 9). There are a number of published plausible explanations for these outcomes, including:

A new plausible explanation is evolving, and this article explores it: Genetics.

Why do two individuals of similar physique, age, fitness, etc., after receiving similar injury (let’s say a sprained ankle or a whiplash neck injury), have very different pain recovery times? (One may recover in days to weeks, the other takes months or even years).

Are there scientific, physiological explanations that account for individual variation in pain recovery rates?

Why do so many chronic pain patients gravitate towards chiropractic? And what are some of the evolving explanations as to why chiropractic helps such individuals?

Our structure, hormones, neurotransmitters, enzymes, and more, are made up of proteins. All told, the human body uses about 22,000 proteins.

When humans consume protein in the diet, our digestive system breaks the protein down into its individual amino acids.

These dietary amino acids are reassembled into the approximate 22,000 proteins that the human body requires to run efficiently.

The reassembly of these amino acids into the functional proteins of life is the job of the human genome, our genetic material. Our genes are essentially a protein assembly factory.

All of this genetic material (nucleotide bases) is packed into 23 pairs of chromosomes. Each cell in our body (about 75 trillion of them) has a complete copy of all 23 chromosomes with its approximate 3-billion nucleotide bases. (There are two exceptions. Red blood cells [approximately 25 trillion of them] contain no genetic material. Sex cells have only one copy of the 23 chromosomes, not a pair; the pair is reestablished when the parents conceive a baby).

When assembling a protein, each amino acid building block is assigned to three adjacent nucleotide bases. The three nucleotide bases that are hooked up to one amino acid is call a codon. The section of a chromosome that codes (assembles) a single protein is called a gene. An example of putting it all together:

Damage to the nucleotide bases of the DNA alters the assembly of the proteins of life. This is the rationale for minimizing exposure to ionizing radiation, free radicals, toxic chemicals, etc.

All proteins of life are important. The emphasis of this paper is a special class of proteins called enzymes.

Enzymes are proteins that act to help the body complete metabolic/biochemical processes. Our life is not possible without these enzymes. The biochemistry of life, without enzymes, would require so much heat or so much pressure that either would kill us.

All enzymes are proteins, meaning that we have a gene that codes for (assembles) them. When reading science, one can always identify enzymes because they end in the letters ase.

All episodes of CSI or any other crime television program emphasize there are differences in each of our DNA, or specifically in the nucleotide base sequence of our DNA. These differences account for the differences between people, such as height, eye-skin-hair color, etc. The point of this discussion is that in a similar fashion, each of us has a different expression (assembling) of the genes that code for (assembles) enzymes. One such enzyme has become particularly important in the understanding of the benefits of the chiropractic adjustment in the treatment of chronic pain.

The Receptor
The receptor converts an environmental stress into the electrical signal.

The Primary Afferent Neuron
The primary afferent neuron brings the electrical signal from the receptor to the spinal cord.

The Second Order Afferent Neuron
The second order afferent neuron brings the electrical signal from the synapse to the brain for the perception of pain.

The Brain for the perception of pain

The brain perceives the electrical signal of pain. 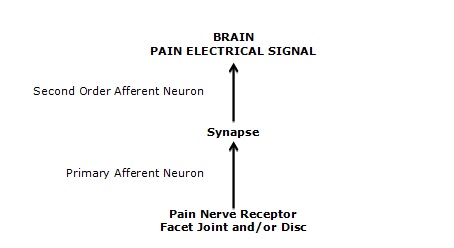 Increasingly, individual differences in the intensity, duration and recovery from pain syndromes is being attributed to genetic differences, and specifically to the production of particular enzymes that influence the electrical threshold and transmission of the pain neurons. The genetics of pain is detailed in the 5th edition of the book Wall and Melzack’s Textbook of Pain, 2006 (14). Chapter 9 is titled “The Genetics of Pain.” The summary of this book includes:

“Pain is associated with considerable variability between individuals. Humans exhibit robust differences in their thresholds and tolerances to controlled noxious stimuli, in their analgesic response to drugs, and in their susceptibility to (and severity of) clinical pain syndromes.”

Pain genetics is better understood in the 2014 book by Judy Foreman, titled “A Nation in Pain.” Her pertinent chapter, chapter 3 is also titled “The Genetics of Pain.” (15) Ms. Foreman notes that genetics influence both the susceptibility and sensitivity to pain, which she defines as:

Genetic susceptibility means the likelihood that you’ll get a chronic pain condition.

Genetic sensitivity means how much it hurts if you do have a chronic pain condition.

On this topic, Ms. Foreman states:

“Across a number of different kinds of pain, genes seem to be at least half the driver of how much pain you experience.”

In her review of the literature, Ms. Foreman notes that a “favorite gene of pain geneticists is COMT.”

COMT is an enzyme. It’s the abbreviation for:

In review, note that this enzyme ends in the suffix ase, further establishing that it is a protein, and as such there is a gene that codes for (assembles) it. And all genes express differently person to person. Apparently the individual expression of COMT can significantly alter one’s sensitivity to pain. Ms. Foreman states:

“We all have the COMT gene, but some people have a form of the gene with high activity, and some, the form with low activity.”

“The luckiest 40 percent of Caucasians have the high-activity form and are relatively unsusceptible to pain.” These individuals are only half as likely as others to develop chronic pain syndromes.

“There’s another key finding emerging from the COMT research. The hormone estrogen decreases COMT activity. Because lower COMT means more pain, this may partly explain why women, who have more estrogen, experience more pain than men.”

Genetic basis for individual variations in pain perception and the development of a chronic pain condition. Hum Mol Genet, 2005

Variation in the COMT gene: implications for pain perception and pain treatment. Pharmacogenomics, 2009

The inference from these studies is that chronic pain susceptibility may be determinable through genetic testing.

Increased production and release of the neurotransmitter norepinephrine increases one’s sensitivity to pain.

COMT degrades the norepinephrine that is produced.

Both reduce the sensitivity of the pain afferents, reducing the perception of pain in the brain.

Studies showing that spinal adjusting reduces the production of norepinephrine have been in the literature for decades (16, 17, 18, 19). The most often cited explanation for this is that there exists a reflex between the articular mechanoreceptors and the sympathetic nervous system pre-ganglionic cell bodies in the gray matter of the spinal cord. This connection has been proven to exist in two-legged animals (20).

The most recent studies showing that chiropractic spinal adjusting inhibits the production of neurotransmitter norepinephrine (2011 and 2017),
use sophisticated modern technology (radioactive glucose, PET scans, and levels of salivary amylase). The authors are from the Division of Cyclotron Nuclear Medicine, Tohoku University (Graduate School of Medicine), Sendai, Japan. Their first study was published in the journal Alternative Therapies Health Medicine, and titled (21):

This group’s second study was published in the journal Evidence-Based Complementary and Alternative Medicine, and titled (22):

Glucose Metabolic Changes in the Brain and Muscles of Patients with Nonspecific Neck Pain Treated by Spinal Manipulation Therapy: A [18F]FDG PET Study

The study conclusions include:

“Brain processing after spinal manipulative therapy may lead to physiological relaxation via a decrease in sympathetic nerve activity.”

“Our assessment of body responses in this study showed relaxation of muscle tension and decreased salivary amylase levels—phenomena that are associated with reduced sympathetic nerve activity.”

The study has four important findings:

The contention that chiropractic spinal adjusting reduces musculoskeletal pain is now irrefutable. The physiological mechanisms by which chiropractic adjusting helps pain patients are still being investigated and are not fully understood. It is probable that multiple mechanisms are occurring simultaneously. Inhibition of sympathetic nervous system tone with a concomitant reduction of the pain enhancing neurotransmitter norepinephrine, the topic of this paper, has both supportive evidence and biological plausibility.