A Plausible Link Between the Brain,
the Cervical Spine, and
Cerebral Spinal Fluid Flow

Sixteen years after he retired from football, at age 53, McMahon appeared on the cover of Sports Illustrated (September 10, 2012 issue) once again (2). It was an article detailing his struggles with dementia. Melissa Segura’s article is profiled:

One of the many women caring for retired NFL players. Laurie Navon frequently has her picture taken with her boyfriend, Jim McMahon—in case he wakes up one day and no longer remembers her.

To compensate, his girlfriend:

In most of the body there is a dynamic balance within the vascular system: the arteries carry blood (and all of its contents) to the tissues and to cells of the body, and the veins return the depleted blood back to the heart for replenishment and redeployment. The arteries and veins are functionally and physiologically linked. Any interruption of the artery-vein relationship is devastating for the involved tissues, and as such for the individual. 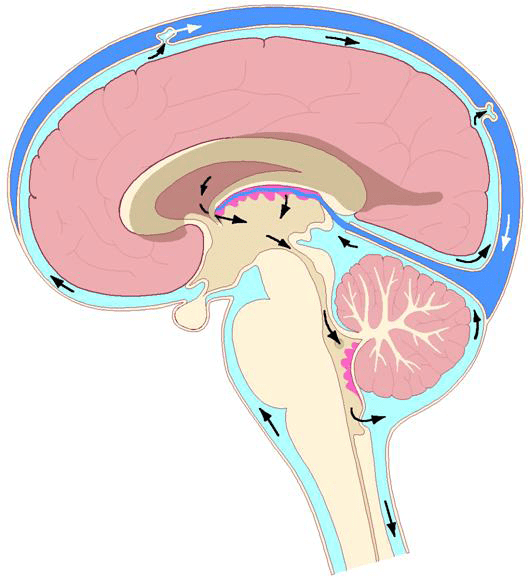 “Upper cervical practitioners utilize the radiographic measurement of static vertebral misalignment to help determine on which side and at what angle the adjustment [specific spinal manipulation] should be given.” p. 59

“MRI is an invaluable aid in diagnosing disorders of the brainstem, medulla, upper cervical cord an spinal canal. Congenital lesions, intramedullary and extramedullary intradural disease, including tumours, infection, ischaemia and demyelination can be assessed. MRI also provides valuable information about the encompassing bony and ligamentous structures of the cranio-vertebral junction and the cervical spine.” p. 57

In 2011, an important study appeared in the journal Physiological Chemistry and Physics and Medical NMR, and titled (4):

In this study, eight multiple sclerosis (MS) patients and seven normal volunteers were MRI scanned with a quadrature head-neck combination coil to visualize the overall cerebral spinal fluid (CSF) flow pattern. The advent of phase coded MR imaging has made it possible to visualize and quantify the dynamic flow of CSF within the cranial vault and spinal canal. The findings were best visualized with an upright weight-bearing MRI. These authors note:

“Every MS patient exhibited obstructions to their CSF flow when examined by phase coded CSF cinematography in the upright position.”

“All MS patients exhibited CSF flow abnormalities that were manifest on MR cinematography as interruptions to flow or outright flow obstructions somewhere in the cervical spinal canal, depending on the location and extent of their cervical spine pathology. Normal examinees did not display these flow obstructions.”

“The abnormal CSF flow dynamics found in the MS patients of this study corresponded to the MR cervical pathology that was visualized.”

“The findings raise the possibility that interventions might be considered to restore normal intracranial CSF flow dynamics and intracranial pressure.”

“The findings further suggest that going forward, victims of Motor Vehicle Whiplash injuries with persisting symptoms, e.g., headache, neck pain, should be scanned by UPRIGHT(R) MRI to assure that their CSF hydrodynamics and cervical anatomy (C1- C7) are normal. Should their CSF hydrodynamics prove abnormal, they should be monitored by UPRIGHT(R) MRI to assure they are restoring to normal over time, or ultimately decompressed by expansion stenting or cervical realignment if they are not.”

This is an important article for chiropractors. These authors suggest that cervical spine malalignment obstructs the flow of cerebral spinal fluid. This obstruction of CSF flow increases intracranial pressure, leading to additional brain pathology and dysfunction.

These authors suggest that the improvement in cranial-cervical malalignment could improve cerebral spinal fluid flow, stopping the aforementioned cascade. In fact, in one of the MS patients, the UPRIGHT MRI found a malalignment of the occiput-C1. This malalignment was successfully treated by an upper cervical chiropractor. The authors noted:


In 2015, another important study appeared in the journal Neurology Research International, and titled (5):

The author notes that cranio-spinal hydrodynamics refers to the relationship between blood and cerebral spinal fluid (CSF) volume, pressure, and flow in the relatively closed confines of the compartments of the cranial vault and spinal canal. He notes that cranio-spinal hydrodynamics can be disrupted by a number of mechanical lesions (congenital, degenerative, an acquired) of the cranio-cervical junction, stating:

“The CCJ links the vascular and cerebrospinal fluid (CSF) systems in the cranial vault to those in the spinal canal.”

“The cranio-cervical junction (CCJ) is a potential choke point for cranio-spinal hydrodynamics and may play a causative or contributory role in the pathogenesis and progression of neurodegenerative diseases such as Alzheimer’s disease, Parkinson’s disease, multiple sclerosis, and ALS, as well as many other neurological conditions including hydrocephalus, idiopathic intracranial hypertension, migraines, seizures, silent-strokes, affective disorders, schizophrenia, and psychosis.”

“Malformations and misalignments of the CCJ cause deformation and obstruction of blood and CSF pathways and flow between the cranial vault and spinal canal that can result in faulty cranio-spinal hydrodynamics and subsequent neurological and neurodegenerative disorders.”

Congenital malformations/anomalies of the CCJ can block blood and CSF flow between the cranial vault and spine, pushing the cerebellar tonsils and/or brainstem into the cervical canal, which further blocks the flow of CSF. This causes an accumulation of fluid in the cranial vault (hydrocephalus). Such conditions include:

An acquired blockage to CSF flow, important to chiropractors, is a misalignment of the atlas on the occipital condyles. This author states:

“Misalignments of the CCJ [atlas-occiput articulation] can obstruct blood flow through the vertebral arteries and veins that can lead to chronic [brain/cranial] ischemia and edema.”

“Blockage of blood and CSF flow due to malformations and misalignments of the CCJ may play a role in chronic [brain/cranium] ischemia, edema, hydrocephalus, and ventriculomegaly [enlargement].”

“The CCJ is a potential choke point for blood and CSF flow between the cranial vault and spinal canal that can cause faulty cranio-spinal hydrodynamics and subsequent chronic ischemia, edema, and hydrocephalus.”

“Malformations and misalignments of the CCJ may play a role in chronic [brain/cranial] ischemia and edema, which may in turn lead to neurodegenerative processes and subsequent diseases.”

“Malformations, misalignments, and deformation of the CCJ compress the vertebral veins, which may affect CSF flow.” “An increase in CSF volume in the brain can compress veins and decrease drainage.”

“Manual and surgical methods for correcting obstructions, as well as manipulation of blood and CSF flow, may help to restore or improve faulty cranio-spinal hydrodynamics in certain cases and decrease the prevalence, progression, and severity of neurodegenerative and other neurological conditions.”

A summary of his pathophysiological model is as follows:

Dr. Flanagan notes that the blockage of cerebral spinal fluid flow at the cranial-cervical junction may be predisposed by a combination of congenital and/or degenerative conditions. Small misalignments of cranial-cervical alignment, superimposed on such congenital and/or degenerative conditions, increase the likelihood of an obstruction of the cerebral spinal fluid flow. The author notes that manual therapy/manipulation of the upper cervical spine has the potential to improve the flow of cerebral spinal fluid, improving the patient’s signs and symptoms.

Axial View of the Foramen Magnum and its Contents, from below: 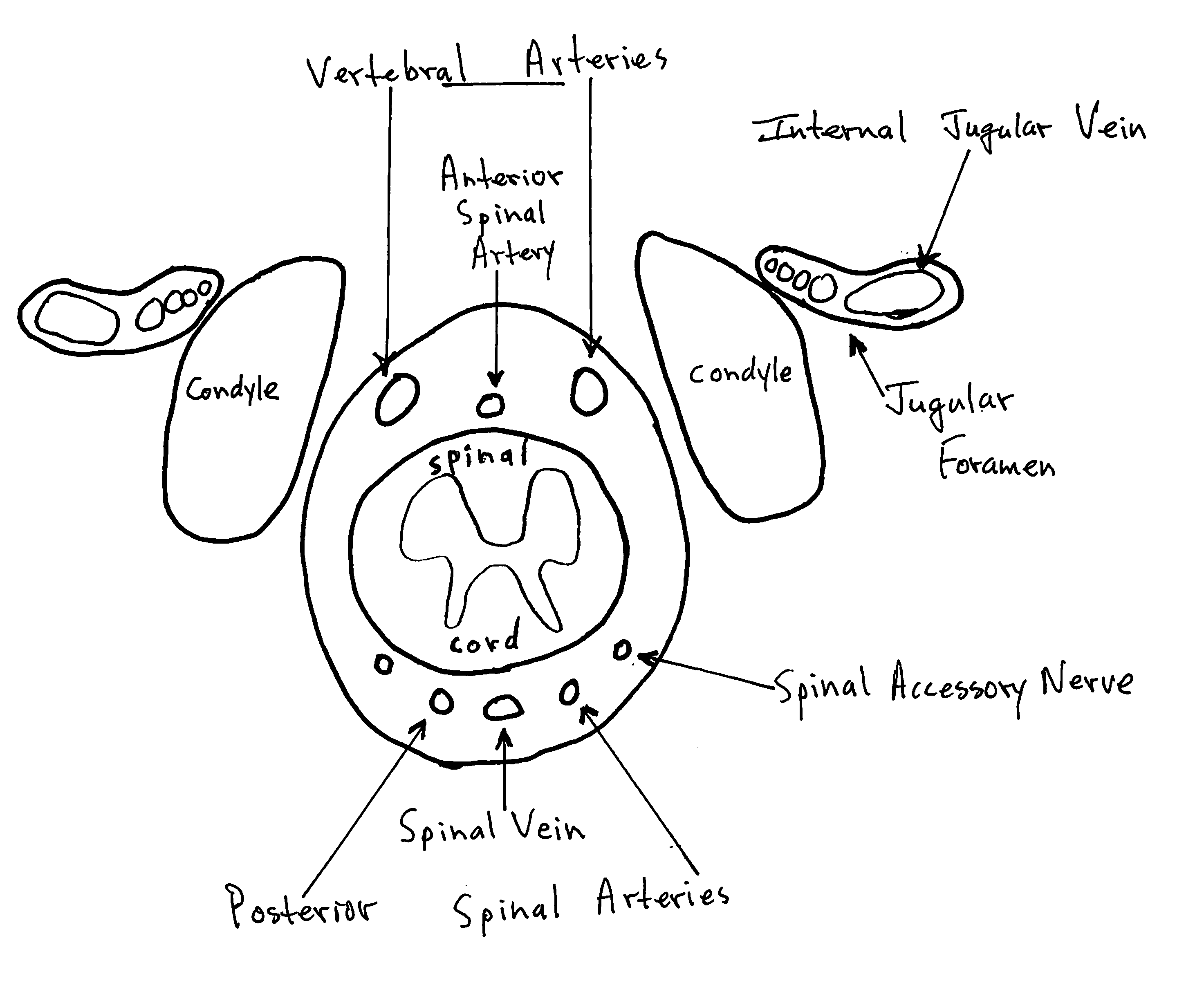 Recently (2016), Jim McMahon has appeared prominently again in the media. He has been profiled in an ESPN Special Report as a consequence of a change in his clinical status. The signs and symptoms of his chronic neurodegenerative disorder have quickly and dramatically improved, and consistent with his character, he’s talking about it (8).

An upright weight-bearing MRI was taken of McMahon’s head and neck. As noted above, the imaging showed an accumulation of fluid (cerebral spinal fluid) in his skull and around his brain. Consistent with the biomechanics and physiology reviewed in this article, McMahon’s upper cervical specific chiropractor took precise radiographs of McMahon’s upper neck and skull. A careful, precise, mathematical analysis of his radiographs showed that there was a meaningful malalignment between the skull and the atlas vertebra. Such findings are consistent with an impairment of fluid flow (venous, arterial, cerebral spinal) between the skull (brain) and the spinal canal. This biomechanical finding could account for the increased fluid noted in the MRI of his brain. The increased brain fluid could account for the plethora of signs and symptoms McMahon was suffering from.

Prior to this unique treatment, the ESPN Special noted that McMahon, age 56, was suffering from:

These findings and physiological explanations pertaining to Jim McMahon are plausible and have been supported by others. For example, in 2007, researchers from Rush University in Chicago noted (7):

“Unlike other vertebrae, which interlock one to the next, the Atlas relies solely upon soft tissue (muscles and ligaments) to maintain alignment [with the occiput]; therefore, the Atlas is uniquely vulnerable to displacement.”

“Displacement of C-1 is pain free and thus, remains undiagnosed and untreated, whereas health-related consequences are attributed to other etiologies.”

“Anatomical abnormalities of the cervical spine at the level of the Atlas [-occiput] vertebra are associated with relative ischaemia of the brainstem circulation.”

“Manual correction of this mal-alignment has been associated with reduced arterial pressure.”

Following the precise analysis of his upper cervical spine-occiput biomechanical relationships, Jim McMahon was carefully and specifically adjusted. The sole goal of the adjustment was to establish perfect alignment between the occiput and the atlas vertebrae. This goal was achieved, verified by post-adjustment radiographs that were similarly biomechanically analyzed. The improvement in his signs and symptoms were essentially instantaneous.

A post adjustment upright weight-bearing MRI of McMahon’s brain and spinal cord showed a remarkable reduction of fluid, as if an inverted bottle had been uncorked. McMahon’s improvement in clinical status is both substantial and appears to be long lasting. Within two minutes of the adjustive procedure, McMahon commented:

A post treatment MRI showed significantly less fluid accumulation on McMahon’s brain. McMahon commented that the procedure “kept me from having bad pains and suicidal thoughts, and having me function fairly normally.”

This paper presents a plausible explanation as to the mechanism of how upper cervical-occiput misalignments might impair the venous, arterial, and cerebral fluid flows between the brain and spinal cord. It also suggests that a specific, precise, upper cervical chiropractic adjustment that results in improved alignment between the occiput an the atlas can “uncork” the flow of these fluids between the brain and spinal cord, resulting in an improvement of a plethora of clinical signs and symptoms.