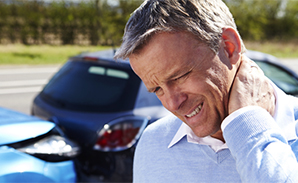 Although whiplash injury can break (fracture) a bone, fractures from whiplash trauma are quite rare. Whiplash trauma primarily injures the joints of the neck. A joint is where a bone meets a bone. Joints allow the bones to move with respect to each other.

Ligaments hold the bones together at the joint. Ligaments also stop the bones from moving too far. When the bones are moved too far, the ligaments are injured. Ligament injury is called a sprain. Whiplash injury moves the bones of the neck too far apart, resulting in neck joint ligament injury (sprain).

Muscles cross the joints. Muscles generate the forces required to move the bones at the joint. If the movement of the joint is too far, not only the ligaments, but also the muscles will be injured. A muscle injury is called a strain. Whiplash trauma can injure both the ligaments (sprain) and the muscles (strain).

Notice that a knuckle joint in your finger only moves in one plane of motion, forward and backwards. Notice that the same knuckle joint does not move side to side. In addition, the joints of the knuckles are not very strong because they do not have to bear weight. In contrast, notice how your spine can move in many directions. The spine can move forward and backwards, it can move side to side (bend left and right), and it can turn left and right (rotation). The spine also transmits the weight of our head, arms, chest, and abdomen. In addition to these tasks, arguably the most important function of the bones of the spine is to protect the spinal cord and the nerves that control the function of our entire body. The spinal nerves exit the spinal cord between the joints of the bones of the spine.

The engineering marvel that allows our spines to have such a large diversity of movement, the strength to bear weight, and the responsibility of protecting the spinal cord and the spinal nerves, is largely due to the unique design of the bones of the spine, called the vertebrae. The vertebrae has three joints, not just one, and the three joints are arranged in the shape of a triangle.

The large joint in the front of the vertebrae (top oval in the drawing below) is called the disc. It is the disc joint that is primarily responsible for bearing the weight of our bodies.

The two joints in the back of the vertebrae are called facet joints. It is the facet joints that control the direction of vertebrae movement.

The neck has 7 movable vertebrae; the entire spine has 24.

The spinal cord lives in the center of the triangle of the three joints, and the spinal nerves exit between the disc joint and the facet joints.