Typical spinal canal space occupying entities include intervertebral disc herniations, tumors, and spinal cord syrinx (a fluid filled cavity within the spinal corn, also known as syringomyelia). These lesions often present with certain symptoms and signs, and their existence is confirmed with diagnostic imaging, usually an MRI. Interestingly, the presence of these entities can also be completely asymptomatic and are found only coincidently. As an example, in 1994, The New England Journal of Medicine published a study where 98 asymptomatic subjects received MRIs of their lumbar spines. Only 36% had normal intervertebral discs at all levels, and 27% had asymptomatic disc protrusions (1).

Another important space occupying entity that may or may not present with symptomology, is the Arnold-Chiari Malformation.

What is Arnold-Chiari Malformation?

At the basic level, Arnold-Chiari Malformation occurs when parts of the brain and/or brainstem slip below the foramen magnum and are found to be in the cervical spinal canal. This compromises the available space for both the cervical spinal cord and for the parts of the brain and/or brainstem that have slipped through the foramen magnum. An important component of this mechanical space occupying compromise is an impairment of the flow of cerebral spinal fluid.

A frequent and important accompaniment of the Arnold-Chiari Malformation is that of a spinal cordsyringomyelia. A syringomyelia, as noted above, is a condition in which a fluid filled cavity is present in the spinal cord and/or medulla. It creates pressure from the inside of the spinal cord, outwards: 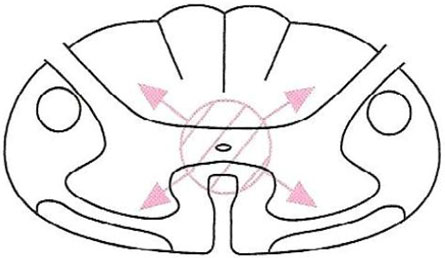 Austrian pathologists Hans Chiari first described the Arnold-Chiari Malformation in 1891, prior to the first x-rays (Roentgen, 1895). German pathologist Julius Arnold’s name was added in 1907. Dr. Chiari described his findings based upon postmortem assessment in infants with varying degrees of congenital hindbrain deformities. Based upon Dr. Chiari’s findings, three Arnold-Chiari Malformation classifications were developed (today there are four):

Type I
There is a downward displacement of the cerebellar tonsils through the foramen magnum and into the cervical spinal canal; yet, the fourth ventricle remains in a relatively normal position.

Type II
There is a downward displacement of the cerebellar tonsils and cerebellar vermis into the cervical spinal canal; the brain stem is displaced caudally; there is an elongation of the fourth ventricle.

Type III
There is a downward displacement of both the cerebellum and medulla into the cervical spinal canal and the development of a cervical meningocele. 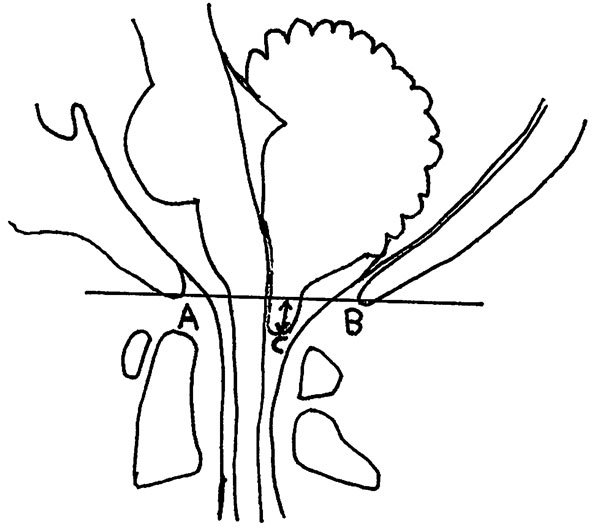 What are the Typical Symptoms of a Patient with Arnold-Chiari Malformation?

The typical symptoms attributed to the Arnold-Chiari Malformation are:

How is Arnold-Chiari Malformation Diagnosed?

The gold standard for a suspected Arnold-Chiari Malformation is an MRI. Standard MRIs are taken with the patient recumbent. However, as detailed below, there is evidence that in the chronic whiplash trauma patient, upright MRI is significantly superior to recumbent MRI documenting the existence of the lesion (4).

Can Chiropractic Spinal Adjusting (Manipulation) be Safely Used to Treat the Symptoms of Arnold Chiari Malformation?

The first case, a 43-year old female had been under chiropractic care for 10 years, including cervical spine adjusting/manipulation. She had been treated for back pain, neck pain and occipital pain, and she always responded well to spinal adjusting.

Following a fall with head trauma, her symptoms included dizziness, photophobia, diminished smell and taste, increased suboccipital pain, and the Valsalva maneuver increased suboccipital symptoms. X-rays of the cervical spine were normal. Chiropractic care failed to improve symptoms. An MRI was exposed and revealed herniation of the cerebellar tonsils through the foramen magnum and caudal displacement of portions of the cerebellar hemispheres. A diagnosis of Arnold-Chiari Malformation Type-I was made.

The patient was treated surgically with a posterior fossa craniectomy and a complete laminectomy of the posterior arch of the atlas. The dura was opened and microdissection was used to remove tonsillar adhesions. The presence of these tonsillar adhesions suggested that her Arnold-Chiari Malformation was a long-standing problem. The patient made a full recovery and remained under chiropractic care.

In this case, chiropractic adjustment/manipulation of her cervical spine did not worsen the patient’s symptoms; they did however fail to result in meaningful improvement.

Eight chiropractic adjustments of the cervical and thoracic spines over a period of 4 weeks did not improve symptoms, and therefore an MRI was exposed. The MRI showed a typical Arnold-Chiari Malformation with syringomyelia.

Once again, chiropractic spinal adjusting/manipulation of the cervical spine did not result in meaningful improvement of the patient’s symptoms, but it did not worsen or aggravate her symptoms or clinical presentation.

“The patient was treated a total of 34 times and at no time during the treatment program did he note any adverse reactions to high-velocity, low-amplitude adjustments.”

The second case was a 36-year old female with a 4-year history of chronic severe vertigo and right arm pain. She had already undergone a cervical MRI showing an Arnold-Chiari Malformation Type I. She subsequently presented for chiropractic care.

The patient had an ataxic gait, could not tandem walk or stand in Romberg’s position, and had nystagmus on all eye movements. Initial chiropractic treatment consisted of 20 visits of low-velocity, low-amplitude mobilization of the upper cervical spine. This was followed by 5 visits ofhigh-velocity, low-amplitude adjustments of the upper cervical spine. These 25 chiropractic visits resulted in improvement but not resolution of her signs and symptoms. The authors state:

“At no time did she note any lasting adverse effects, even when high-velocity, low-amplitude adjustments were applied to the upper cervical spine.”

Asymptomatic Arnold-Chiari Malformation Type I is “not necessarily a contraindication to skilled adjustments to the cervical spine, and that viewing it as such would mean possibly denying the patient a form of treatment that could be helpful in the management of a health problem that may be unrelated to the malformation.”

“In a patient with a known Arnold-Chiari Malformation Type I, certain precautions may be taken to minimize any irritation to the cerebellar tonsils that have herniated through the foramen magnum.”

Avoid extension of the upper cervical spine during adjustment.

“Excessively vigorous adjusting to the upper cervical spine should be avoided, since this can potentially irritate neural structures in an already crowded canal.”

“Neither Occiput-C1 nor C1-C2 were adjusted in these patients, but there does not appear to be any reason why this would create any greater likelihood of complication.”

In 2014, chiropractors Adam Sergent and Gregory Cofano published a study in the Journal of Chiropractic Medicine titled (5):

This 34-year-old female had a chronic history of headaches, dizziness, nausea, photophobia, and temporary loss of vision aggravated by postural positions while bending forward. These symptoms were often incapacitating. An MRI showed an Arnold-Chiari Malformation Type I, with cerebellar tonsils descending 5 mm into the cervical spinal canal. Neurosurgery was recommended.

Three years after initial diagnosis, the patient sought chiropractic and expressed her desire to avoid surgery. She was treated for 1 month with 9 visits, using high-velocity, low-amplitude adjustments of the cervical spine of prone diversified manipulation to C4/C5. She reported reduction of her headaches after this treatment.

Five years later, the patient suffered a symptomatic exacerbation. She was again treated using cervical chiropractic manipulation using prone diversified technique to C4/C5. The dizziness and headache were resolved after 3 visits. At her 3-month follow-up, she continued to be symptom-free. The authors concluded:

“A patient with headaches and dizziness and a previous diagnosis of Arnold-Chiari Malformation Type I responded positively to chiropractic care.”

The abstract from this study makes the following statements:

“An 18-year-old female patient presented with left dominant neck pain after a motor vehicle collision. Her cervical spine MRI revealed syringomyelia with associated Type I Arnold-Chiari Malformation. Some researchers have reported that these might be considered contraindications to spinal manipulation. Nevertheless, her benign and functional clinical examination suggested otherwise and she underwent four manipulative treatments in 2 weeks. By the end of the treatment plan and after 1-month follow-up, she was asymptomatic, no adverse effects were noted and her outcome assessment score decreased from 56% to 0%. This case illustrates that spinal manipulation may be a useful adjunctive treatment procedure for spinal pain, even in the presence of syringomyelia and Chiari malformation, which may not necessarily be a contraindication to spinal manipulation, when performed by a skilled and well-trained physician.”

If Chiropractic Care Does Not Achieve an Acceptable
Clinical Outcome on the Arnold Chiari Malformation Patient,
What is the Next Step of Clinical Intervention?

The standard allopathic management of the patient with subjective Arnold-Chiari Malformation who did not respond favorably to conservative treatment is surgical decompression (4). Specifically, standard surgery is a posterior fossa craniectomy and a complete laminectomy of the posterior arch of the atlas (3).

There is no doubt that asymptomatic chiropractic patients have Arnold-Chiari Malformation Type I. These patients certainly receive routine spinal adjusting to the cervical spine, and no (as of 8.14.15) adverse events have been reported in the literature (PubMed).

Chiropractic patients with subjective Arnold-Chiari Malformation Type I also present to chiropractors. The evidence presented here suggests that chiropractic spinal adjusting may not help these patients, but cervical spine adjusting is unlikely to worsen the patient’s signs and symptoms.

Also presented is evidence that patients with known subjective Arnold-Chiari Malformation Type I may benefit from chiropractic spinal adjusting, especially if it is done skillfully and not too vigorously. However, little is known about osseous adjusting of the occiput-atlas-axis on such patients, and caution is advised. Perhaps, the upper cervical spine on such patients should be adjusted with lower force approaches.

In 2010, Michael Freeman and colleagues published an article in the journal Brain Injury titled (7):

Cervical MRI scans for 1200 neck pain patients were reviewed; 600 whiplash trauma cases and 600 non-trauma controls. Half of the groups were scanned in a recumbent position and half were scanned in an upright position

In the non-trauma group, cerebellar tonsillar ectopia was found in 5.3% of the recumbent MRIs, and in 5.7% of the upright MRIs. This finding suggests:

Although Chiari type I malformation is classically considered to be a congenital lesion, these authors note that it can be acquired. These authors note that whiplash trauma is capable of causing a cerebral spinal fluid leak. In the upright position, the reduced volume of cerebral spinal fluid allows the cerebellar tonsils to slip below the foramen magnum, creating the cerebellar tonsillar ectopia finding.

The standard diagnostic test for cerebral spinal fluid leak is using radioisotope cisternography. The standard treatment is a blood patch. This is procedure in which the patient’s own blood is withdrawn from a vein and injected into the spinal canal. The platelets in the blood will “find” the leak and create a seal, a patch. Symptoms usually quickly resolve, and recurrence is rare.

These authors make these important points:

Perhaps all chronic whiplash patients should be assessed with an upright MRI to look for cerebellar tonsillar ectopia.